I stumbled over an interesting Tweet from @relizarov stating

As I cound not believe that in the first place, I digged a little deeper and learned about a bug in the Java HashSet implementation with a very long history and finally a fix in sight. It provides a great insight into the complexity of simple things.

First of all lets have a look what the problem is all about and reproduce it. I created a very small starter project you can clone from Codeberg and run it with a simple mvn test. The code is quite simple as you will find as follows. It creates a Set and a List of Integers and fills them with a range from 0 to a given size. After that, we measure the milliseconds needed to remove all list items from the set.

The results are not surprising. The execution time slowly increases with the number of items getting larger, but overall, it’s still pretty fast for large Sets and Lists.

This time, the results are more insteresting. Still starting quickly for small datasets, the execution time explodes to over 22 minutes for a million elements. What the hell is happening here?!

To illustrate the difference I put the numbers into a little graph. As you might notice, the y-axis is in logarithmic format. 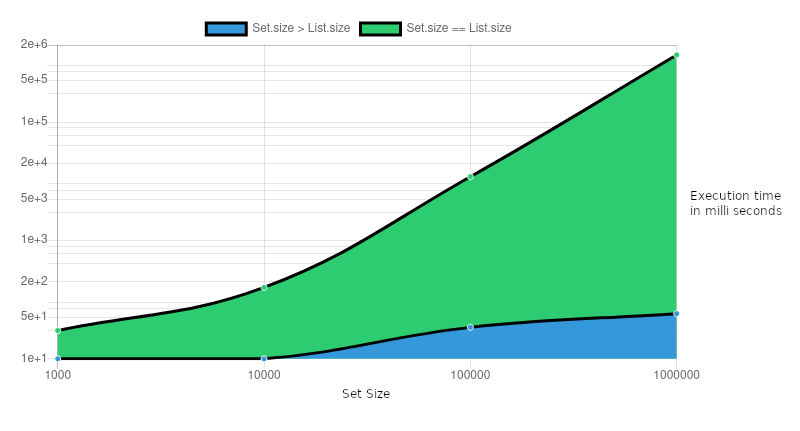 As soon as we switch to linear format, the difference between the two datasets becomes so big, one doesn’t even show up anymore. 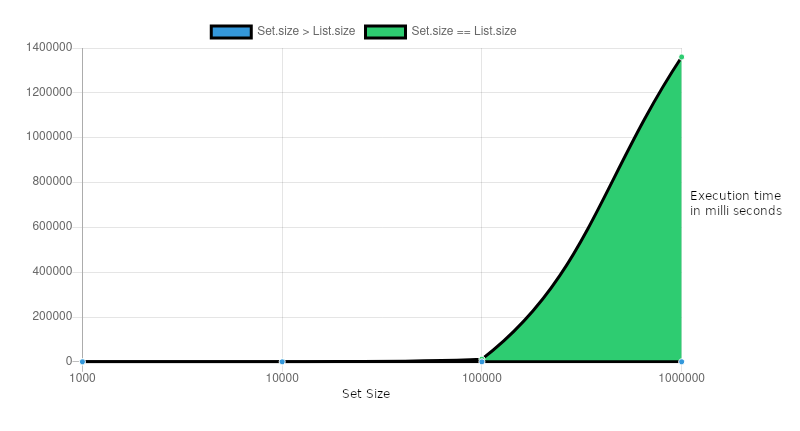 After reproducing the problem, it is now time to find the cause.

Finding the root cause

The first hint can actually be found the the JavaDoc of AbstractSet.removeAll() which is also used by HashSet:

So as the documentation tells us, there is a small optimization in the code that that leads to a different behavior based on the sizes of the Set and the Collection to be removed. The code looks like this:

If the size of the Set is bigger than the given Collection, HashSet.remove() is called on the HashSet which is pretty fast, O(1) to be precise.

The problems start as soon as the Set is no longer bigger than the given Collection. Then the second branch of the if-else statement is executed and Collection.contains() is called. The performance of this methods is unfortunately highly depending on the specific implementation. For example, looking at HashSet it’s again O(1) and will not cause any issue, whereas ArrayList.contains() will run in O(N) and here we are. That’s everything it needs to make the execution time explode. ArrayList.contains() will be called in a loop for every element in the set. For a set of size M, this results in O(M*N). In our example, as both the Set and the List are of equal size, the complexity is in fact worst case with O(N^2). So what has been planned as an optimization actually destroys predictable program behavior and may kill application performance under certain circumstances.

There are multiple workarounds that were initially posted in this blog post which also described the problem already 10 years ago! First option is to simply force the Collection to be removed to be a HashSet. There is overhead in creating the new HashSet, but it is almost negligible.

Another workaround is to not use removeAll, but manually iterate over the collection to be removed and call HashSet.remove() on the source set. This is basically reproducing the first if-else branch of the original removeAll method which also avoids the overhead of creating the new HashSet.

Java 15 is now available. Unfortunately, running the test again had the same bad results as before. Bug has been moved to JDK 16 now.